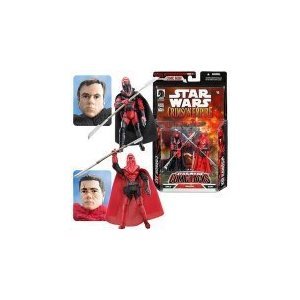 Get Kir Kanos and Carnor Jax in this shared Entertainment Earth Exclusive - #1 in the all-new Star Wars Expanded Universe series of 2-packs from Hasbro. Includes 3 3/4-inch figures of Kir Kanos and Carnor Jax, neither of which have ever been made as an action figure before! Buy this set and you'll get: 1x Kir Kanos action figure, as seen in the Crimson Empire comic book series. He includes removable helmet, cloth cape, and double-bladed staff. 1x Carnor Jax action figure with accessories. 1x Crimson Empire comic book. First in a series of Hasbro Expanded Universe Action Figure 2-Packs! If you miss out on this one, your collection will be incomplete! And despite rumors to the contrary, this item will not be made available in major stores ! Who is Kir Kanos? After the fall of the Empire and the final death of the Emperor in Empire's End, Kir Kanos set out to avenge the death of his former leader by taking out the traitors in the Empire. In the process, the entire guard is wiped out, except for Kir Kanos. Who's responsible for this? Kanos investigates in the Crimson Empire, comic series. This great action figure includes awesomely sculpted armor, a double-bladed staff, a biker scout style pistol, a removable helmet with a scruffy face underneath, and of course, his red cape.
View our full range of Hasbro products