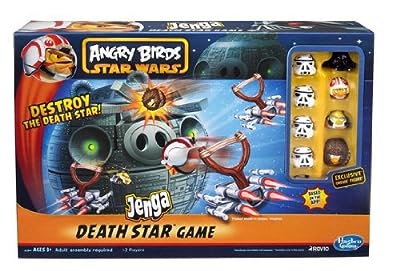 Ready, aim, fire! Now, two popular favorites come together for a totally fun gaming experience! STAR WARS meets ANGRY BIRDS in this galactic battle. Launch birds from the X- WING FIGHTER launcher to knock down the DARTH VADER and STORMTROOPER pigs. Do you have what it takes to destroy the JENGA DEATH STAR? Destroy the DEATH STAR!: That's no moon...it's the ultimate threat to the rebel birds. Let the epic STAR WARS battle begin! DARTH VADER and his menacing STORMTROOPERS are ready for an intergalactic battle, ANGRY BIRDS style. Take turns trying to topple the Empire! Pull back the X-WING FIGHTER launcher to launch an epic squawk attack with the LUKE SKYWALKER, HAN SOLO and CHEWBACCA birds. How many hits will it take the heroes to knock out the JENGA blocks and destroy the DEATH STAR? Roll, launch, and win!: Based on the hugely popular mobile app, now STAR WARS meets ANGRY BIRDS in this JENGA DEATH STAR game! Roll the die, grab the X-WING FIGHTER slingshot and then get into galactic action as you launch the LUKE SKYWALKER, HAN SOLO and CHEWBACCA ANGRY BIRDS characters in a battle against the STORMTROOPER and DARTH VADER pigs. How many tries will it take you to knock out the pigs or win big by breaking the JENGA DEATH STAR into pieces? Stack it up, then knock it down!: See the DEATH STAR take shape as you stack all of the JENGA blocks inside. Then place the DARTH VADER pig and his STORMTROOPER pigs at their posts and you're ready to let the Rebel birds fly! Game includes special code to unlock ANGRY BIRDS STAR WARS app content. What's In The Box?: DEATH STAR Frame, LUKE SKYWALKER Bird, HAN SOLO Bird, CHEWBACCA Bird, DARTH VADER Pig, 4 STORMTROOPER Pigs, X-WING FIGHTER Launcher, 31 Plastic JENGA Blocks, 1 Lock Block, Die, Base, Label Sheet, Game Guide/Setup Card