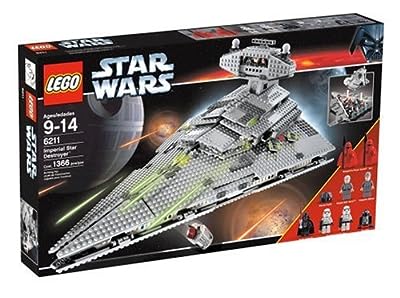 Price: $99.99
As of 2020-05-05 07:37:59 UTC (more info)
Product prices and availability are accurate as of 2020-05-05 07:37:59 UTC and are subject to change. Any price and availability information displayed on https://www.amazon.com/ at the time of purchase will apply to the purchase of this product.
Buy Now from Amazon
Product Information (more info)
CERTAIN CONTENT THAT APPEARS ON THIS SITE COMES FROM AMAZON SERVICES LLC. THIS CONTENT IS PROVIDED 'AS IS' AND IS SUBJECT TO CHANGE OR REMOVAL AT ANY TIME.

Designed to strike awe and terror into Rebels hearts, the Imperial Star Destroyer and the rest of the Empires fleet of space vessels maintain order in the galaxy through shows of power and ruthless fighting tactics. This massive (23-inches when assembled) Lego space ship, based on the Star Wars craft, will be a feather in the cap of any self-respecting Lego buff. With 1,366 pieces and a top and sides that swing open to reveal the inner workings, construction of the kit will be an adventure in itself. Once built, the Imperial Star Destroyer will provide hours more of play, as fans re-enact scenes from the millennia of fictional Star Wars history, or even create new battles and alliances in conjunction with other Lego Star Wars kits (Jabbas Sail Barge, the B-Wing Fighter, etc.).

Kids (and adults) will love discovering the multiple gadgets within: a platform for Darth Vader to talk to a hologram of the Emperor, a meditation chamber for Darth Vader with a crane to remove his helmet, turbo laser cannons on the bridge that really discharge, an escape shuttle releases in case of emergency, a storage closet for Stormtrooper rifles, and a bridge that slides open. Nine mini-figures are included (Darth Vader, Grand Moff Tarkin, two Stormtroopers, two Emperors Royal Guard, Imperial Officer, R2-D5, and Mouse Droid). --Emilie Coulter