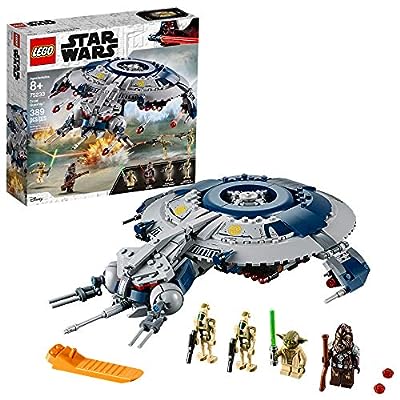 Set out on exciting missions with the heavily armored LEGO Star Wars 75233 Droid Gunship. As seen in Star Wars: The Revenge of the Sith, this detailed construction toy features an opening cockpit with space for a Kashyyyk Battle Droid figure, lowering landing gear and non-firing directional cannons at the front. Add no less than 8 flick missiles and 2 stud shooters, plus Chief Tarfful and Yoda minifigures to the mix, and you have the perfect recipe for a galaxy of action-packed LEGO Star Wars battles! This building toy includes 2 minifigures and 2 LEGO figures.