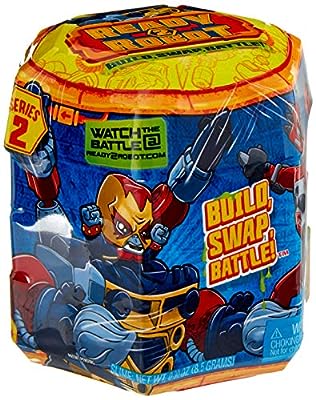 Based on the hit animated series, Ready2Robot is the only collectible action figure that kids can build, combine, battle and slime with an army of over 30+ different Mech Bots!

Each Mech Bot is fun to unbox and build! Collect them all to swap & combine their legs, arms, weapons and battle accessories to create hundreds of possible combinations!

And every Mech Bot comes with its own supply of Battle Slime packed in a resealable, easy to store Slime Capsule!

Kids can play and display their Mech Bot figure creations, or store them in the included reusable packaging pod!

Build, combine, battle and slime, as seen in the hit animated series! Each Ready2Robot Mech Bot is fun to unbox and build! Collect all of the Mech Bots to swap their legs, arms, weapons and battle accessories and create 100's of new combinations! Includes Mech Bot, Pilot, Battle Slime and reusable battle station packaging!