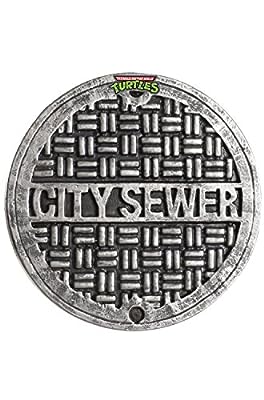 Price: Click Button for Price
As of 2020-05-05 07:49:04 UTC (more info)
Product prices and availability are accurate as of 2020-05-05 07:49:04 UTC and are subject to change. Any price and availability information displayed on https://www.amazon.com/ at the time of purchase will apply to the purchase of this product.
Availability: Not Available Discontinued
Buy Now from Amazon
Product Information (more info)
CERTAIN CONTENT THAT APPEARS ON THIS SITE COMES FROM AMAZON SERVICES LLC. THIS CONTENT IS PROVIDED 'AS IS' AND IS SUBJECT TO CHANGE OR REMOVAL AT ANY TIME.

When you're one of the Teenage Mutant Ninja Turtles, you need to be able to get creative during a fight! After all, when the evil Shredder attacks, those turtle boys can't really cut him any slack. (We heard that from some kind of song somewhere.) Which means Leonardo, Donatello, Raphael and Michelangelo need to prepared for battle no matter what! That's why they make some handy weapons out of stuff that's just laying around the sewers, like a manhole cover. (Hey, whatever works, right?) Now, your kid can take note from those pizza loving ninja turtles!

This Child TMNT Sewer Cover Shield looks just like a manhole cover! Just pair it up with a katana, a sai, some nunchucks or even a bo-staff. It's the kind of weapon combination that will keep those nasty Foot Soldiers from getting the jump on your kid! Splinter would be proud of your little ninja's resourcefulness. - Shield