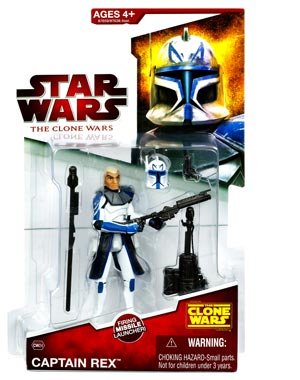 Price: $49.99
As of 2020-05-05 04:44:14 UTC (more info)
Product prices and availability are accurate as of 2020-05-05 04:44:14 UTC and are subject to change. Any price and availability information displayed on https://www.amazon.com/ at the time of purchase will apply to the purchase of this product.
Buy Now from Amazon
Product Information (more info)
CERTAIN CONTENT THAT APPEARS ON THIS SITE COMES FROM AMAZON SERVICES LLC. THIS CONTENT IS PROVIDED 'AS IS' AND IS SUBJECT TO CHANGE OR REMOVAL AT ANY TIME.

Captain Rex accompanies Anakin Skywalker to the planet Teth to rescue Jabbaâ€TMs kidnapped son. Like all clone troopers, Captain Rex believes that the mission always comes first. When he and his fellow troopers are surrounded by battle droids, outnumbered and outgunned, he never wavers in his commitment to the mission, even if it means this battle could be his last.

Step into The Clone Wars animated world with this articulated action figure based on the anime character. In full clone trooper armor and eyes that seem to be on the lookout, this figure comes with a small arsenal of weapons including a firing missile launcher. Aim the projectile at your target and stage your own galactic battles.