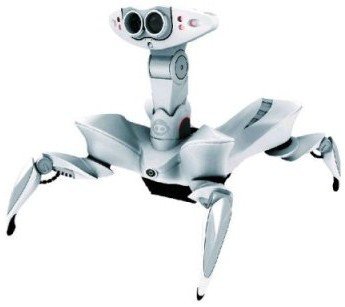 Roboquad is an inquisitive robot with insect-like movements and an advanced sensor array. Change his Awareness, Activity or Aggression levels to completely alter his personality and behaviors. Set him in autonomous mode and watch him interact with his environment. The first true robotic arthropod with unique multi-directional movement capabilities and advanced sensory awareness.

Amazon.com Product Description Liven up your living room with the Roboquad, a four-legged, spider-like robot with unprecedented mobility and awareness. The Roboquad is designed with advanced sensory awareness, helping it react quickly to the surrounding environment and pursue a moving object in any direction, including forward, backwards, and sideways. When an object such as a cat or a remote control car passes, the robot's head swivels around so it can monitor its environment without moving. After it sweeps the room with a tightly focused infrared beam, it makes rapid decisions about how to react to its environment. Once it identifies the object--the sensitive infrared detector can see objects as far as 13 feet away while also identifying their size and spatial details--the Roboquad heads out in one of three speeds, navigating through doorways and detecting table edges in the process. Your cat will meow in amazement, as will your guests. The robot offers five scanning sequences: a Smart Scan, which examines the surroundings and then reacts if anything changes; Scan Left and Scan Right, where the robot turns and faces any object within a 3-foot range; Approach Nearest Object, during which the robot looks left and right while ramping up the scanning range, and then moves toward the closest object found; Escape Walk, where the robot selects the largest open space and moves toward it; and Flinch Response, which helps the robot respond to quickly approaching objects. In addition, many of the Roboquad's decisions are based on its three controllable personality settings, one each for awareness, activity, and aggression. A more aggressive Roboquad will react quicker to approaching objects than a mellower Roboquad, for example.

The robotic arthropod offers more than just movement, however, with multicolored flashing lights and techno sound effects. The Roboquad also boasts four usage modes: Direct Control, Autonomous, Guard, and Sleep. Direct Control mode invites you to control the robot's direction, style of walking (such as crab walk, stomp walk, or rotation walking), and head movements, while in Autonomous mode, the robot interacts with his environment as he moves through it. Guard and Sleep modes, meanwhile, are designed for downtime. In the former, the Roboquad visually scans the environment and stays alert for noises, then scares off intruders with a series of crazy sound effects. In the latter, the robot automatically falls asleep after five minutes of inactivity and then powers down after 24 hours.

The robot owes its imaginative movements to its agile rotating legs and articulated neck, all of which respond to the machine's advanced artificial intelligence. And watch out when the Roboquad feels like getting down, as the machine includes a built-in dance demo along with a more traditional movement demo. Other details include 72 preprogrammed functions, up to 40 programmable moves, a built-in light sensor that reacts differently based on the ambient light, and a four-layer, full-function remote control. The Roboquad, which is designed for children ages eight and older, requires four C and three AAA batteries (not included) and measures 8.5 by 9 by 12.5 inches (W x H x D). It's also backed by a 90-day warranty.